Last Sunday, at the 9:30am Cathedral Mass, I mentioned that I would be out of the diocese for the next couple of weeks on my Ad Limina Apostolorum and to please pray for me.  Upon making this statement, several of the faithful have asked me what exactly is the visit Ad Limina Apostolorum (to the threshold of the apostles).

Additionally, I mentioned that I would be keeping the faithful updated on my visit via this blog.  Therefore, the first of several entries follows:

The visit Ad Limina Apostolorum by all the bishops who, in communion with the Apostolic See, preside in charity and in service over particular Churches (dioceses) in every part of the world, has a very definite purpose: that is, the strengthening of their own responsibility as successors of the Apostles and of their hierarchical communion with the Successor of Peter, the Pope. The point of reference is a visit to the tombs of Sts. Peter and Paul, pastors and pillars of the Roman Church.

The visit Ad Limina Apostolorum is an important moment in the exercise of the Holy Father’s pastoral ministry: in fact, on such a visit, the Supreme Pastor receives the Pastors (bishops) of the dioceses  and discusses with us questions concerning our ecclesial mission.

It is my intention, through this blog to give an analysis of the origins and historical development of the ad limina visit together with a reflection on its theological, spiritual and pastoral meaning in order to deepen its significance.

This analysis and reflection will also allow us to clarify the foundations, reasons and ultimate objectives of an institution (Church) which is so revered because of its antiquity and so filled with ecclesial importance.

Over the next couple of weeks, I will limit the blog entries to highlighting a few points for a better understanding . 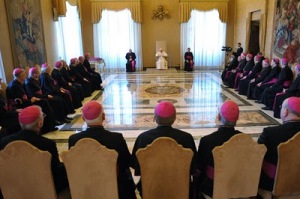 The picture above is the Holy Father’s discussion with the bishops of Regions VIII (Minnesota and the Dakotas) and Region IX (Iowa, Kansas, Missouri and Nebraska).

Just to give an idea of what exactly the Holy Father conveys to the bishops, the following is the text of what he presented to these bishops.

I greet all of you with fraternal affection on the occasion of your visit ad limina Apostolorum. As you know, this year I wish to reflect with you on certain aspects of the evangelization of American culture in the light of the intellectual and ethical challenges of the present moment.

In our previous meetings I acknowledged our concern about threats to freedom of conscience, religion and worship which need to be addressed urgently, so that all men and women of faith, and the institutions they inspire, can act in accordance with their deepest moral convictions. In this talk I would like to discuss another serious issue which you raised with me during my Pastoral Visit to America, namely, the contemporary crisis of marriage and the family, and, more generally, of the Christian vision of human sexuality. It is in fact increasingly evident that a weakened appreciation of the indissolubility of the marriage covenant, and the widespread rejection of a responsible, mature sexual ethic grounded in the practice of chastity, have led to grave societal problems bearing an immense human and economic cost.

Yet, as Blessed John Paul II observed, the future of humanity passes by way of the family (cf. Familiaris Consortio, 85). Indeed, “the good that the Church and society as a whole expect from marriage and from the family founded on marriage is so great as to call for full pastoral commitment to this particular area. Marriage and the family are institutions that must be promoted and defended from every possible misrepresentation of their true nature, since whatever is injurious to them is injurious to society itself” (Sacramentum Caritatis, 29).

In this regard, particular mention must be made of the powerful political and cultural currents seeking to alter the legal definition of marriage. The Church’s conscientious effort to resist this pressure calls for a reasoned defense of marriage as a natural institution consisting of a specific communion of persons, essentially rooted in the complementarity of the sexes and oriented to procreation. Sexual differences cannot be dismissed as irrelevant to the definition of marriage. Defending the institution of marriage as a social reality is ultimately a question of justice, since it entails safeguarding the good of the entire human community and the rights of parents and children alike.

In our conversations, some of you have pointed with concern to the growing difficulties encountered in communicating the Church’s teaching on marriage and the family in its integrity, and to a decrease in the number of young people who approach the sacrament of matrimony. Certainly we must acknowledge deficiencies in the catechesis of recent decades, which failed at times to communicate the rich heritage of Catholic teaching on marriage as a natural institution elevated by Christ to the dignity of a sacrament, the vocation of Christian spouses in society and in the Church, and the practice of marital chastity. This teaching, stated with increasing clarity by the post-conciliar magisterium and comprehensively presented in both the Catechism of the Catholic Church and the Compendium of the Social Doctrine of the Church, needs to be restored to its proper place in preaching and catechetical instruction.

On the practical level, marriage preparation programs must be carefully reviewed to ensure that there is greater concentration on their catechetical component and their presentation of the social and ecclesial responsibilities entailed by Christian marriage. In this context we cannot overlook the serious pastoral problem presented by the widespread practice of cohabitation, often by couples who seem unaware that it is gravely sinful, not to mention damaging to the stability of society. I encourage your efforts to develop clear pastoral and liturgical norms for the worthy celebration of matrimony which embody an unambiguous witness to the objective demands of Christian morality, while showing sensitivity and concern for young couples.

Here too I would express my appreciation of the pastoral programs which you are promoting in your Dioceses and, in particular, the clear and authoritative presentation of the Church’s teaching found in your 2009 Letter Marriage: Love and Life in the Divine Plan. I also appreciate all that your parishes, schools and charitable agencies do daily to support families and to reach out to those in difficult marital situations, especially the divorced and separated, single parents, teenage mothers and women considering abortion, as well as children suffering the tragic effects of family breakdown.

In this great pastoral effort there is an urgent need for the entire Christian community to recover an appreciation of the virtue of chastity. The integrating and liberating function of this virtue (cf. Catechism of the Catholic Church, 2338-2343) should be emphasized by a formation of the heart, which presents the Christian understanding of sexuality as a source of genuine freedom, happiness and the fulfilment of our fundamental and innate human vocation to love. It is not merely a question of presenting arguments, but of appealing to an integrated, consistent and uplifting vision of human sexuality. The richness of this vision is more sound and appealing than the permissive ideologies exalted in some quarters; these in fact constitute a powerful and destructive form of counter-catechesis for the young.

Young people need to encounter the Church’s teaching in its integrity, challenging and countercultural as that teaching may be; more importantly, they need to see it embodied by faithful married couples who bear convincing witness to its truth. They also need to be supported as they struggle to make wise choices at a difficult and confusing time in their lives. Chastity, as the Catechism reminds us, involves an ongoing “apprenticeship in self-mastery which is a training in human freedom” (2339). In a society which increasingly tends to misunderstand and even ridicule this essential dimension of Christian teaching, young people need to be reassured that “if we let Christ into our lives, we lose nothing, absolutely nothing, of what makes life free, beautiful and great” (Homily, Inaugural Mass of the Pontificate, 24 April 2005).

Let me conclude by recalling that all our efforts in this area are ultimately concerned with the good of children, who have a fundamental right to grow up with a healthy understanding of sexuality and its proper place in human relationships. Children are the greatest treasure and the future of every society: truly caring for them means recognizing our responsibility to teach, defend and live the moral virtues which are the key to human fulfillment. It is my hope that the Church in the United States, however chastened by the events of the past decade, will persevere in its historic mission of educating the young and thus contribute to the consolidation of that sound family life which is the surest guarantee of intergenerational solidarity and the health of society as a whole.

I now commend you and your brother Bishops, with the flock entrusted to your pastoral care, to the loving intercession of the Holy Family of Jesus, Mary and Joseph. To all of you I willingly impart my Apostolic Blessing as a pledge of wisdom, strength and peace in the Lord.

I hope you all are well.

Be assured of my prayers for every one of the priests, deacons, religious and lay faithful in the Diocese of Corpus Christi.

This entry was posted in Ad Limina Apostolorum 2012. Bookmark the permalink.
Loading Comments...